You Are Here: Home » Të ndryshme » Personalitete » WHO IS MISS MARPLE?

WHO IS MISS MARPLE? 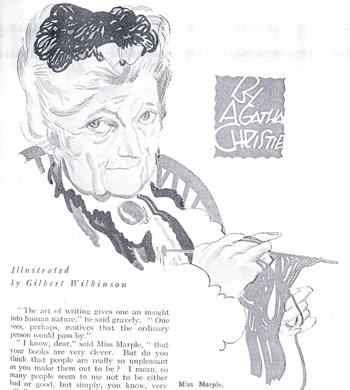 Miss Jane Marple is the legendary spinster detective created by the author Agatha Christie. Like Hercule Poirot. Miss Marple, the elderly and rather frail resident of St. Mary Mead, soon became a fan favorite with mystery novel enthusiasts. Her shrewd observations about the world, mostly drawn from her experiences of village life, and her Victorian “mind like a sink,” helped her solve thirteen book length murder mysteries, and several intriguing puzzles in short stories.

Miss Marple as a detective is quite effective, and often delves into human experience to draw parallels between people she’s met before and those involved in a murder. Despite being awash in murder, she always manages to keep her manners and her head. According to Miss Marple, murder is evil and distasteful, but must be dealt with in a professional way.

Like Poirot, Miss Marple sometimes encounters cases while away from home, and at other times, shocking murders shake the foundations of St. Mary Mead. From her first murder cases, Miss Marple gains a reputation with local police and detectives at Scotland Yard. Although an investigator might not know her at the beginning of a novel, by the end, he is usually overjoyed by Miss Marple’s fine mind. She often states that her advantage in solving crimes is that people don’t expect her to matter. As an old maid she might appear scatty or unimportant, allowing her to move in on suspected murderers with little danger to herself.

Little is said about why Miss Marple never chose to marry. She does take pride in being an old maid but seems to have superhuman insight into relationships between men and women. It is clear she lives on a slightly reduced income, though she is occasionally given presents by her gifted mystery writing nephew, Raymond West. She does seem to enjoy her nieces, nephews and more distant relations, and she is also an avid gardener.

A first look at Miss Marple would reveal a keen, rather gossipy, particular “spinster.” Yet as readers encounter her in her thirteen novels, she shows a more sensitive side. She definitely has sympathy toward victims of crimes and views murder as the distasteful weed that destroys an otherwise beautiful garden of human existence. Like her gardening, she can’t help but go after such “weeds” with great vigor.

Christie wrote Miss Marple stories from 1930-1971. The novel Sleeping Murder was written in 1940, but not published until 1976, evoking some confusion among readers about where it fits chronologically with the rest of the Miss Marple books. Many Christie fans cite A Murder is Announced as perhaps the best of the novels, but all of the books have their merits for lovers of mysteries.

There have been numerous adaptations of Miss Marple novels for both film and television. Actresses like Angela Lansbury, Helen Hayes, and Margaret Rutherford have all attempted to fill Miss Marple’s shoes. It is generally agreed that the late Joan Hickson captured the best and most faithful portrayal of Miss Marple. From 1984-1992, Hickson played Miss Marple in eleven BBC  adaptations of the Marple mysteries, which stayed faithful to the books.

The talented Geraldine McEwan took over as a new Miss Marple for BBC in 2004. Though many people admire her performance, those who love faithfulness to the books may not be well satisfied with the recent BBC productions. They do take liberties with the plot that the character of Miss Marple might have termed shocking.