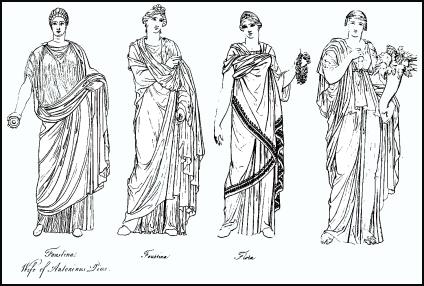 Roman Clothing
Roman clothing was designed to reveal the social status of its wearer. Roman Clothing signified rank, status, office and authority. Interesting facts and information about the different types and colors of the clothing worn by the Romans who lived in Ancient Rome and visited places of spectacle and entertainment like the Colosseum. Clothing worn by the Emperors, Senators, Soldiers, Roman citizens, Slaves, the Women, the Vestal Virgins and of course the Gladiators. Interesting facts and information about the Roman Clothing worn by people who lived in Ancient Rome.

Roam Clothing
The following list and links provide an index to the articles and contents of this category. Click a link for comprehensive facts and information and details relating to Roman Clothing:

Roman Clothing – Clothing for Men and Roman Sumptuary Laws
The ordinary clothing for men were the toga and the tunic. The tunic was an undergarment which was put on (put on) whereas the toga was considered an outer garment which was wrapped around (amictus). There were several different types of toga and each type conveyed a specific purpose and symbolism. There were specific laws called Roman Sumptuary Laws which dictated which type of clothes could be worn by Romans. This included the types of material and fabrics, the style of the clothes and the color that people were allowed to wear. Only the Emperor was allowed to wear a toga which was entirely colored in purple. The clothes that men wore therefore immediately reflected their status in society.

Roman Clothing – Clothing for Women, the Stola
Clothing for men and women were very similar. The toga  was at first worn by women as well as men, but later married women wore a different robe, called a stola, which had a broad border or fringe, reaching to the feet. Prostitutes and women condemned for adultery, were not permitted to wear the stola. Unlike the toga worn by the men the stola only conveyed the marital status of the woman. The stola was a symbol of marriage publicly proclaiming her respectability and adherence to traditions. The stola did not indicate the social class of women.

Roman Clothing – Materials, colors and Fabrics
The manufacture of Clothing Materials and fabrics changed as the Romans became more powerful and came into contact with other cultures. Luxury materials were imported by the Romans from their provinces and other far off lands. Fine linen material from Egypt, cotton fabrics from India and silk from China which was quite rare and extremely expensive. The range of colors of clothing were produced by complicated dyeing processes. Expensive fabrics were imported from abroad and the dyes used for coloring these clothes were equally as expensive. Purple was the most expensive color to produce which is why it was only worn by the emperors. The colors, materials and fabrics which Romans were allowed to wear were dictated by the Sumptuary Laws. A vestitor or, in Latin, vestio, was charged with making clothing.

Roman Clothing – The Toga, How to make a Toga and hosting a Toga Party
The toga was a loose outer garment without sleeves generally made from a woollen cloth and draped gracefully and precisely around the body. The color of the toga was normally white, except in case of mourning, when a black or dark colored toga was worn. The toga picta or toga palmata was a toga with a gold border which was only permitted to be worn by generals during their triumphs. The toga symbolised a garment of peace because soldiers did not wear the toga. The toga is such an important item of clothing that it is immediately associated with the Romans. It is remembered today when people host a toga party during these events the whole theme of the Romans is taken into account with making Toga Party decorations, sending toga party invitations and creating a toga party menu.

Roman Clothing – The Tunic
The tunic was a white woollen vest worn below the toga, coming down a little below the knees before, and to the middle of the leg behind, at first without sleeves. Tunics were fastened by a girdle or belt about the waist, to keep it tight, which also served as a purse. Both men and women wore a tunic. The colored broad stripes or bands on a Roman tunic was called latus clavus. The width and color of the bands indicated the status of the wearer.

Roman Clothing – Trousers
The Romans initially wore neither trousers, socks nor breeches, but used sometimes to wrap their legs and thighs with pieces of cloth. This later changed in the period of the Empire when soldiers wore trousers or breeches, especially in the colder climates of the northern provinces.

Roman Clothing – Shoes, Sandals and Boots
The chief coverings for the feet were the calceus, which covered the whole foot or the solea, a slipper or sandal which covered only the sole of the foot, and was fastened on with leather thongs or strings. The shoes of the senators came up to the middle of their legs, and had a golden or silver crescent on the top of the foot. The shoes or shoes of the Roman soldiers were called caligæ, sometimes the boots were shod with nails.

Roman Clothing and Hairstyles
The hairstyles of Roman men changed with the fashions of the time which were often dictated by the Emperor. The men were known to wear wigs, dye their hair and use curling tongs to produce a curled effect. Women wore elaborately curled hairstyles. Hair was also arranged in layers, twisted, waved and curled. Ringlets were created which fell to the sides and the backs of the head. Wigs and hair pieces were used to create an illusion of abundant hair.

Gladiator Clothing and Gladiator Sandals
The protective clothing worn by the Roman gladiators were designed in many different styles and forms. Descriptions of their armor, helmets, shield, weapons and clothing for each type of gladiator are described. Basic, cheap woollen tunics (tunica) and cloaks were worn by gladiators when they were not in the arena. Gladiators were allowed to keep the rewards earned by winning gladiator combats and were able to buy expensive clothing which would be worn at public banquets. The materials used to make Gladiator Sandals was predominantly leather. The Ancient Romans were expert in the process of tanning and produced both supple leather which was ideal for making gladiator sandals and tough leather which was used to make protective armor.