You Are Here: Home » Kuriozitete » History of animal experimentation 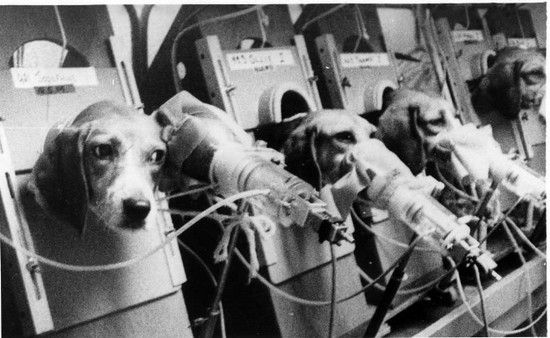 “The use of destructive and nondestructive testing upon various animal species in order to better understand the mechanisms of human and animal behaviors, emotions, and thought processes.

Biologists believe that chimpanzees share at least 98.4 percent of the same DNA as humans. Gorillas have a genetic composition which is at least 97 percent consistent with that of humans. Because the advancement of scientific technology has increasingly demonstrated similarities between animals and people, popular attitudes toward the use of animals in research and scientific experimentation have changed considerably. Ironically, this knowledge of the close genetic bond between species has enhanced the interest in animal experimentation. Nevertheless, evidence of animals as “sentient” beings, capable of a wide range of emotions and thought processes, has led scientists and animal activists to search for alternative ways to study behavior without victimizing animals. Although most psychology research does not involve deadly disease or experimental pathology, it often involves unrelenting or quantitative mental, physical, and psychological stress—all of which animals are capable of experiencing.

Animal rights activists, protesting the use of animals in laboratory experiments by dressing in monkey suits, block the entrance to the Department of Health and Human Services in Washington, D.C. (Corbis-Bettmann. Reproduced with permission.)

Charles Darwin’s theory of evolution in 1859 became the scientific rationale for using animal experiments to learn more about humans. In the late nineteenth century, Ivan Pavlov’s experiments in the development of “conditioned” responses in dogs (salivation) helped to foster an increasingly authoritative school of psychology known as behaviorism. The contemporary human treatment regimen known as behavior modification is fashioned from parallels drawn on these early experiments in operant conditioning.

In 1876, England passed the British Cruelty to Animals Act, which regulated animal experimentation. Still, behaviorist thinking at that time denied animals any psyche or emotion. Academic journals described animal behavior only in terms of physiologic response to stimuli, with no mention of any psychological consequence.

In later years, the behaviorist theories were overshadowed by the development and spread (from Europe to the United States) of ethology which concerns itself with genetic predisposition, or innate/instinctive behavior and knowledge. This theory continues to prevail in the United States, but in terms of relevance, it is tempered by the reality that between 85 and 90 percent of all animal experimentation is conducted on species not sufficiently similar to humans to draw dispositive parallels. The majority of all animal research in the field of psychology is conducted on various rodent species (rats, mice, hamsters, etc.) or birds as laboratory subjects.

Australian philosopher Peter Singer made the case for an end to animal experimentation with his 1975 book, Animal Liberation. Coinciding with his book was the comprehensive and sensitive research of such ethologists as Jane Goodall and Dian Fossey, who suggested that primates were capable of a full spectrum of emotions, including love, sorrow, jealousy, humor, and deceit. These animals also learned to communicate with humans by using over 300 learned signs in American Sign Language. Studies with other species produced similar results. During the late 1990s, an African gray parrot named Alex, who was being studied at the Arizona State University, fell ill and was required to spend the night alone at a veterinary clinic. When his keeper attempted to leave the room at the clinic, Alex cried out, “Come here, I love you, I’m sorry. Wanna go back.” Such examples of the yet-unknown extent of emotional, psychological, and behavioral capacity in other species have cast new doubts on the scientific rationale for the continuation of captive animal experimentation.

Animal experimentation is still widely used in psychological research. Animals are used in projects of many types from alcohol-induced aggression to pain medication. A 1999 medical study questioned whether animal experimentation on the neuroendocrine mechanisms in laboratory rats might provide a better understanding of human bisexuality. However, the trend in academia seems to be following the popular distaste for animal experimentation. A British study of undergraduate students enrolled in psychology classes during the 1990s showed that students in psychology were less in favor of animal testing than students in medicine, and second-year students were less in favor of such research than first-year students. Several articles have been published which address the general lack of acknowledgment, in leading introductory psychology textbooks, of contributions made by animal subjects.

Concerns about animal cruelty have led to the search for alternative methodologies. Of great promise in this regard is computer simulation technology. As early as 1996, psychology students were able to study ” shaping” and partial reinforcement in operant conditioning, by using a computer-created “virtual rat” named Sniffy. Commensurate with such technological developments and their refinements, statistics have shown a slow but consistent yearly decline in animal experimentation through 1999./http://psychology.jrank.org/